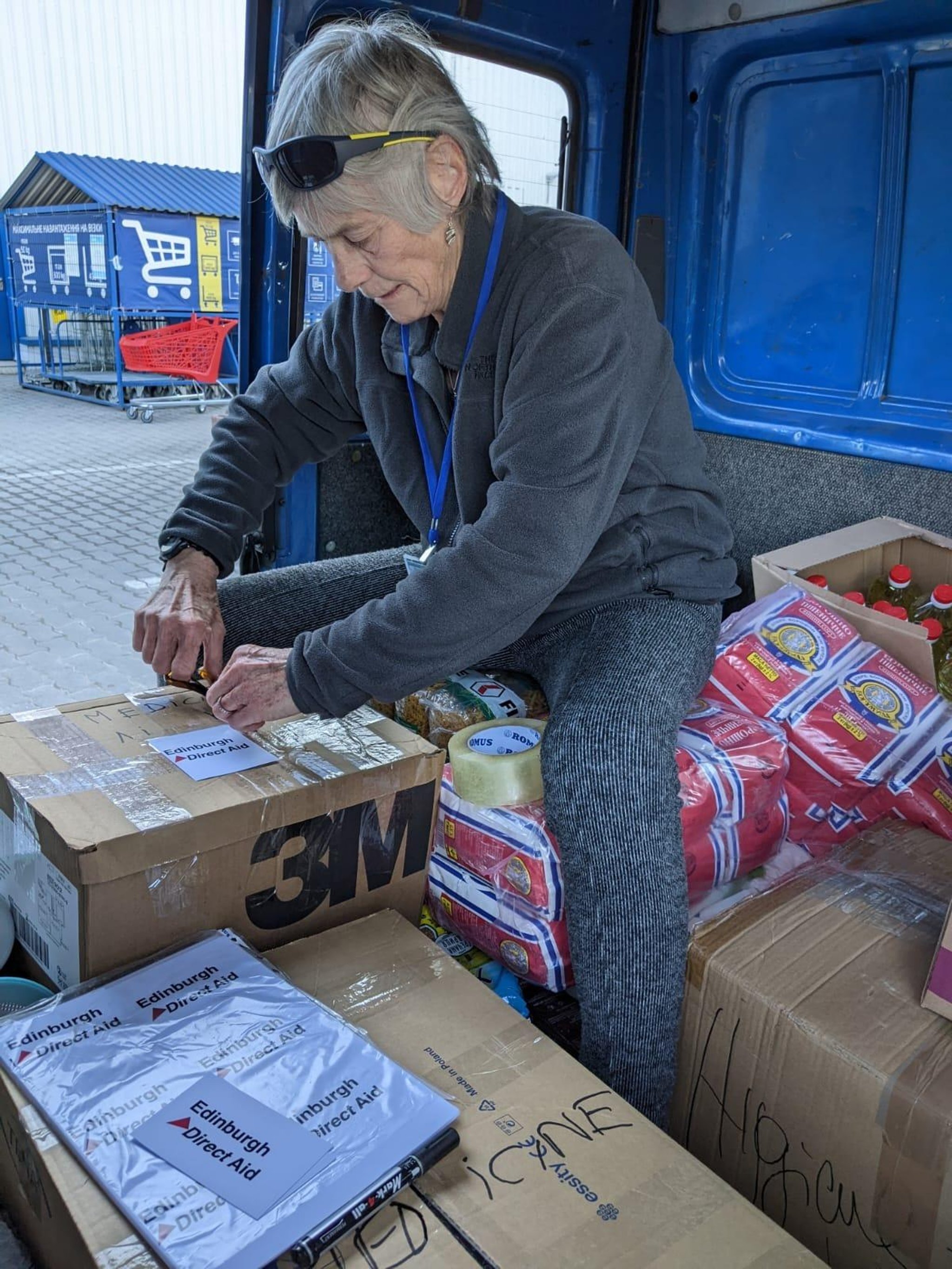 A volunteer with Edinburgh Direct Aid, the retired teacher spent most of March working to help supply food to refugees from other parts of the country who had taken shelter in the western Ukrainian city, which was previously seen as a safe haven.

Now, after a brief respite in the UK, she is driving back through Germany and Austria to a Lviv which she believes will be much changed following attacks on Sunday night, which saw seven people dead and others, including a child – a refugee from Kharkiv – injured.

Up until yesterday the city had suffered only one previous attack, on an abandoned oil depot on the outskirts of the city.

Maggie Tookey is in Lviv, working for Edinburgh Direct Aid.

“I think the mood will be very different,” she says. “When I was there, the sun came out and everybody was out in the cafes. Nobody was listening to the sirens, the sounds would go off and shops would shut, but nobody dived into shelters or anything. I mean, we’ve had quite a few rockets land, but it seems to be really tuning up now, so that will have changed the atmosphere hugely. I think people are now beginning to worry that Lviv is now going to be targeted. I think Lviv may be targeted because they know that weaponry is coming through that way.”

Ms Tookey is concerned for the thousands of refugees from places like Kharkiv and Mariupol, which suffered brutal attacks earlier in the war, who took refuge in Lviv. Ukraine’s foreign minister, Dmytro Kuleba, said at the weekend that Mariupol essentially did not exist any more, following a seven-week siege by Russian troops.

She says: “People came from the most horrendous shelling and bombing. We had a couple of women from Mariupol in the shelter where I was based, and they came there for safety. And I suppose, relatively speaking, of course, it still is secure, but it’s becoming less secure and that might become more more the case as the next few days go on. We can’t know, we just have no way of knowing what he’s going to do.”

Edinburgh Direct Aid is supplying food and essential supplies to people in Ukraine.

When Ms Tookey first arrived in Ukraine, she started helping families to travel from the Ukrainian border to a reception centre in Poland. Once the flood of refugees began to slow – and the Polish authorities started to organise buses to transfer the refugees – she began to look around for other work.

“I had heard they were struggling in Lviv,” she says. “So I went there.”

After teaming up with a young Ukrainian translator, Ira, she began to work in women’s shelters, where women and children affected by the war in other parts of Ukraine were living.

“We were supplying fresh food vegetables to the shelters because they couldn’t afford to feed all the numbers coming in, mainly women and children from Kharkiv and the east,” she says. “Then I realised that what they needed most was food and medicine sent directly to these places. So that’s what I started doing.”

Ms Tookey, helped by local volunteers, sourced enough aid to fill a train carriage sending the aid directly to the Donetsk region, which is controlled by pro-Russian authorities.

She was impressed by the Ukrainian train company’s ability to tirelessly repair tracks shelled by Russian troops. The train of aid took four days to get to its destination in Kramatorsk.

“The line being damaged is neither here nor there, because they just get workers in overnight, who repair the train. The train moves on, then they have to stop again and the same happens,” she explains.

However, she fears that now, even the resilience of the railway workers may not be enough in the face of more intense Russian attacks.

Like many charities, including the major aid organisations, Edinburgh Direct Aid has a warehouse in Lviv as a base from where aid can be sent throughout the country.

“Charities have to stockpile their stuff in Lviv and just have to hope it doesn’t get hit,” she says. “I don’t see what else they can do. It’s got to come through in vast quantities. Whether they’re going to target the city centre, I don’t know but of course a lot of the warehouse storage is outside the city centre. So it’s the luck of the draw, in a way.

“It won’t change what we do. We will still use the storage that we have and just hope it doesn’t get hit, there’s nowhere else to go. I don’t think there is anywhere [in Ukraine] that hasn’t been struck at least once or twice.”

On this trip, Ms Tookey plans to travel by road, with her translator, Ira and two drivers, to the badly-hit city of Kharkiv in the east of the country, where she will deliver a large shipment of thyroid medication, sourced from Turkey. Thyroid disease is common in Ukraine due to fall out from the Chernobyl disaster in the 1980s.

She knows the risk in the face of a more concerted military campaign by the Russians, but she is not deterred.

“I’m 71, so I’m a bit philosophical about it all,” she says. “I can’t say I’m worried about it at all, I don’t think about it. If you think about that all the time, you don’t really get on with the work. It sounds so trite to say life’s a risk, but it’s a risk driving down this motorway at the moment.

“I don’t worry about it, but I will be careful when I go east, but mostly because I’ve got the responsibility of people like Ira the translator with me, who is 24, and the driver, who’s Norwegian.”

She says while it is mainly Ukrainian locals who are taking the major risks, she has met some young British men who are also willing to take on the more dangerous jobs.

“You know how young guys are, they like to think ‘wow, we can do this. Let’s get in there,’ they think they are invincible,” she says. “I know that I’m not invincible, so I shall act with caution. But I will try to do what I intend to do.”