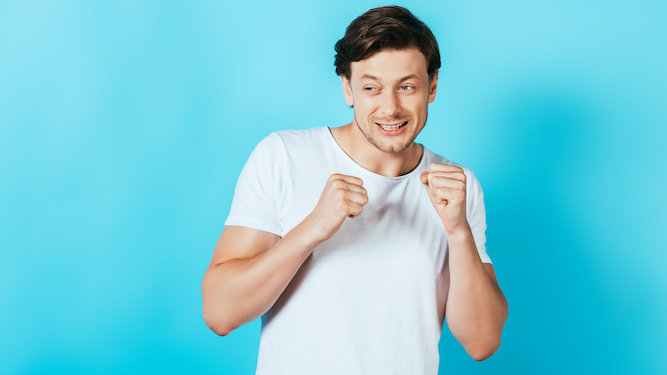 DO you sometimes wish you could resort to violence like Will Smith? Sadly, the option’s unavailable for those not hard in any way. Here’s the reality:

Film fights are designed so you can tell what’s going on. Real fights are a high-speed flurry of vicious punches and kicks, and if you lands you’re f**ked. Once you’re in a ball on the floor trying to protect your face you won’t be doing cool blocks and counters from John Wick.

During your last fight at primary school you burst into tears. You really don’t want that as an adult. So if someone gives you grief in a pub, do nothing. Being slightly humiliated instead of totally humiliated is definitely a victory.

You don’t know how to do threats

What do you say to a co-worker you want to threaten? ‘Pack it in or I’m going to twat you’ sounds a bit juvenile. ‘Hit you’? Too clinical and nerdy. ‘Batter you’ sounds like a Northern caricature. Your threats will cause more puzzlement than fear.

Your opponent always has the element of surprise

A sudden threat can leave you paralysed. The only solution is to constantly expect violence at any second like Jason Bourne does, which will kill you from heart fatigue aged 50 and in the meantime puts a real damper on walks in the park, going on holiday or visiting farmers’ markets.

A pretty big obstacle to fighting. It’s surprisingly easy to miss, and punching someone even slightly taller than you is knackering. If your feeble attacks are hardly doing any damage, you might just be winding your opponent up like throwing tennis balls at a bear. That won’t end well.

Employers are terrified of legal action over bullying. ‘Gavin was disrespecting me so I kneed him in the groin then went in with the head’ is up there with ‘they caught me stealing’ as the worst possible responses to ‘Why did you leave your last job?’ You’ll need a one f**k of a CV to pull that one back.

You could go too far

You may be puny, but when the red mist descends who knows what you’re capable of doing? You might break all their limbs or rip their eyeballs out. Obviously this is bollocks, but in your own mind it’s a great face-saving way of avoiding a fight.