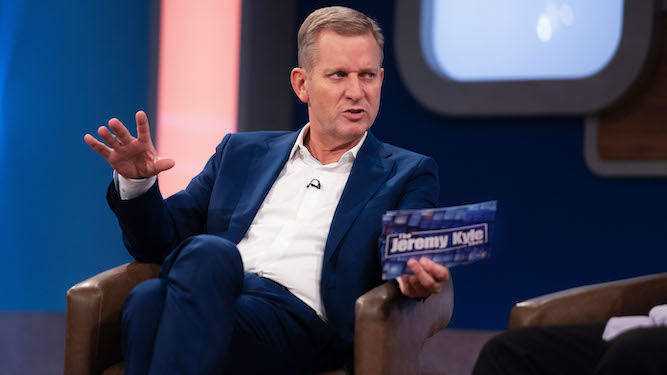 THE Horned One here. That documentary about Jeremy Kyle confirmed he’s one of mine, and we’ve a very special show lined up for him. Here’s the running order:

The show will open with one of Jeremy’s labyrinthine family disputes, eg ‘My stepdad who’s also my common-law brother owed my Mum for weed…’ etcetera, but so convoluted and impossible to follow Jezza’s brain will literally explode, sending his eyeballs flying. Then that’s repeated from several angles with slo-mo.

Lie detectors are bullshit and shouldn’t be used to ruin lives for cheap entertainment. Except your life, Jeremy. When asked questions like ‘is fire hot?’ he’ll answer yes, the machine will say he’s lying and burly security demons will appear from backstage with branding irons to teach him to be truthful.

The exploitative appeal of The Jeremy Kyle Show was always a good sneer at the snaggle-toothed troglodytes who appeared. In an ironic punishment, Jezza will be cursed with an abscess in a molar and must fix it with just a rusty spoon before the ad break.

Jeremy is fond of bullshit like: ‘Think you’re a big man, eh? Want to step up here, big man?’ Only there’ll be no security and the guests will be the shrieking damned who’ll rip all his limbs off and chuck him on a barbecue. Then his limbs will reattach and it’ll keep happening. I got that from Doctor Faustus. Great guy.

Jeremy loved a guest with a substance problems. So he’ll love fighting his own hilarious addictions, like getting the shakes and hallucinating unless he downs a regular glass of cat’s piss, or being hooked on laxatives and the toilets being locked.

After a hard day’s filming a millennium-long show, Jeremy’s off home. To the sinkhole council estate he shares with his family of feral teenage demons who stick him in a burning wheelie bin and drag it behind their joyriding Fiesta. Over speedbumps.