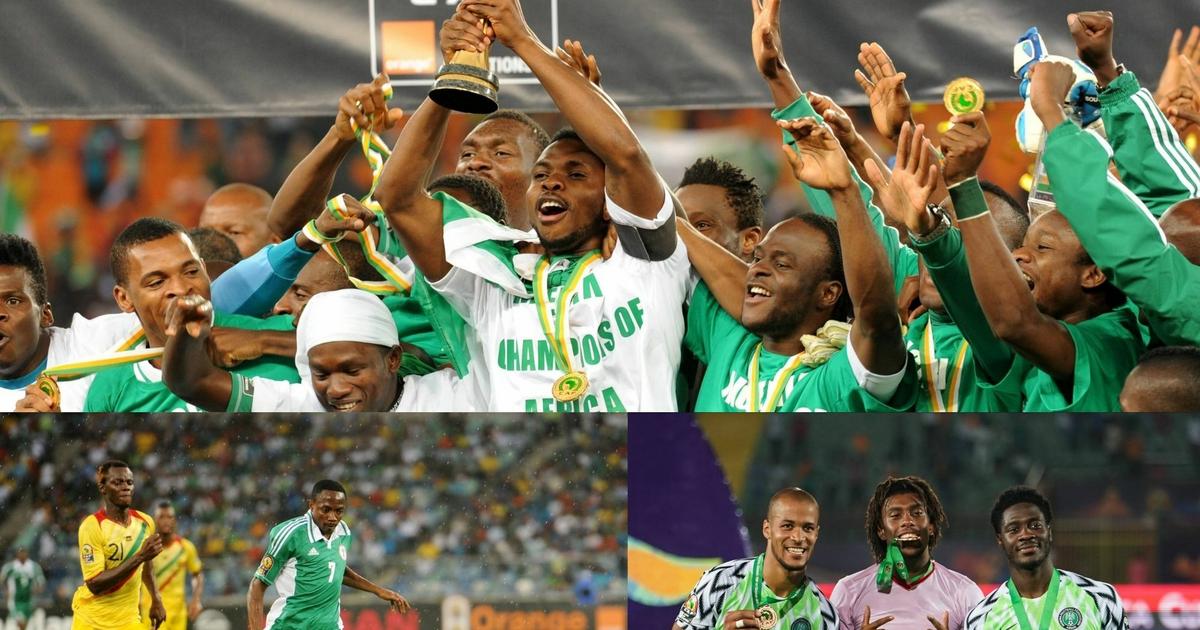 The opening game in Group D of AFCON 2006 in Egypt was between Nigeria and Ghana, a close encounter between on and off pitch rivals that lived up to the billing.


The game had its moments but looked destined for a draw until the 85th minute when Taye Taiwo broke the deadlock with a piledriver from 35 yards out.


That stunning goal not only won them the game but it set the tone for a good AFCON campaign for the Super Eagles who would go on to win all three group games on their way to a bronze medal. Also worth mentioning that the Super Eagles manager was at the time was Augustine Eguavoen.


Quarterfinal win against Ivory Coast in 2013

Having finished second in Group C, Nigeria was set to play against Ivory Coast in the quarter-final who were the overwhelming favourites.


Age was fast catching up with Ivory Coast’s golden generation but they still had a better squad than Nigeria at the time and had just won a difficult group rather comfortably.


Ivory Coast finished Group D unbeaten against Togo, Tunisia, and Algeria, winning two and recording a draw. To further contextualise, Ivory Coast scored seven goals in the group stages which is a lot by AFCON standards, the most by any team in the 2013 group stages.


So how would the Super Eagles who barely qualified from the group with perhaps their weakest squad in recent memory (on paper) defeat the Ivorian superstars? Through a combination of factors that was evident all through their 2013 AFCON journey.


Sheer will and determination from the players, the late Stephen Keshi’s tactical nous, and most importantly…destiny. For whatever reason, Nigeria just looked like they were destined to win.


Sunday Mba would then wriggle his way past two opponents and fire home the winner via a deflection in the 78th minute.


The demolition of Mali in the 2013 semi-finals

The win against Ivory Coast proved to be the shot in the arm Nigeria’s 2013 AFCON campaign needed as they went into the semifinals against Mali with renewed confidence.


The Super Eagles were the favourites and they played like it, absolutely dominating the Malians from start to finish and were already 3-0 up by half-time.


Victor Moses tormented the Malian defence and put the ball on a plate for Elderson Echiejile to dive in with a header and open the scoring 25 minutes in.


Brown Ideye bundled in a cross five minutes later and then Emmanuel Emenike fired home another free-kick, this time aided by a massive deflection just before half-time.


A certain 20-year old named Ahmed Musa then came off the bench and scored the fourth almost immediately after which the Malians scored a consolation goal to end the game 4-1 in Nigeria’s favour.

Unlike the last one in 1994, the Super Eagles of Nigeria won their third Africa Cup of Nations title as underdogs. They were not fancied as favourites at all, equipped with what was considered a weak squad at the time.


Some might argue they got lucky with the seeding as Ivory Coast in the quarter-finals was their toughest opposition. Nigeria played Mali in the semi-final and Burkina Faso in the final which admittedly is not the toughest run of games but they still had to win them and they did exactly that.


Sunday Mba had been the biggest revelation of the 2013 AFCON and he proved that once more, this time on the grandest stage. The diminutive midfielder twinkle-toed his way past the Burkina Faso defence and then poked the ball home on the 40th minute to score what proved to be the winning goal.

There is a school of thought in football tournaments that a bronze medal is better than silver because one has to win to get bronze but lose to get silver. Nigeria appears to have taken this philosophy very seriously as they have won eight bronze medals in AFCON history.


The Super Eagles hold the distinction of having played eight third-place playoffs and won every single one of them.


The most recent one was in Egypt in 2019 where Nigeria defeated Tunisia by one Odion Ighalo goal to nil and this is significant for several reasons.


The most important reason was that Nigerian football needed the boost at the time having failed to qualify for the previous two AFCON tournaments. Egypt 2019 was Nigeria’s first Africa Cup of Nations appearance since they won it in 2013 so they could not afford to leave empty-handed.