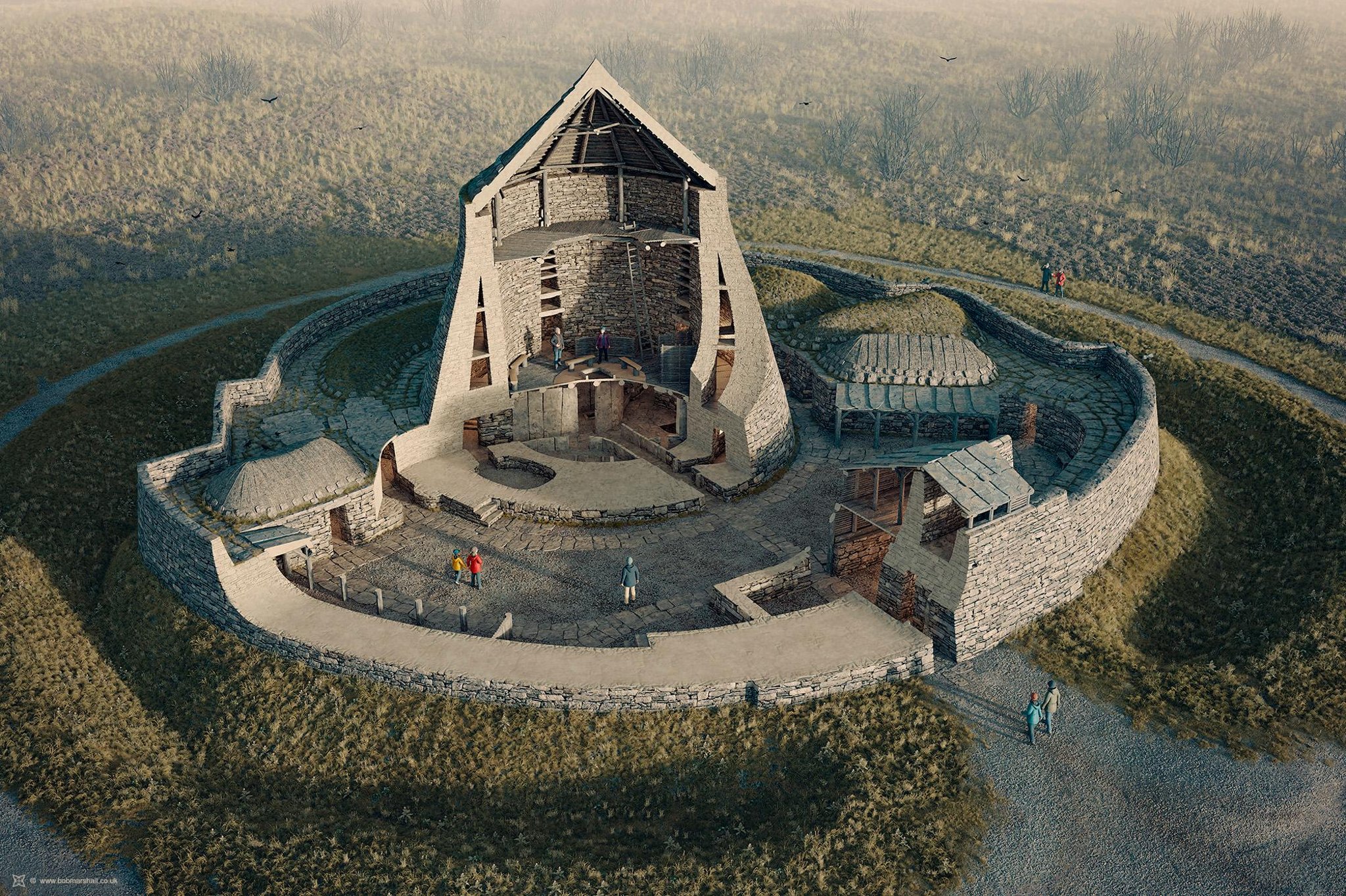 The broch – a tall, drystone tower built largely across the Highlands and Islands during the Iron Age – will be recreated in Caithness, where more brochs are found than anywhere else in the country.

Digital reconstruction artist Bob Marshall, who specialises in historic buildings, has brought the remarkable structure to life for the Caithness Broch Project (CBP), who want to recreate the broch using only materials and techniques available to the original builders.

Remains of 2,000-year-old house in the far north of Scotland saved

A digital reconstruction of the Iron Age broch planned for a site in Caithness. PIC: Bob Marshall/Caithness Broch Project.

The broch, designed by CBP co-founder Iain Maclean, combines the most important elements from the architectural array of brochs across Scotland.

Mr Maclean said: “We wanted to capture a variety of features found in broch construction from all over Scotland, so the design isn’t a carbon copy of any individual broch but instead is a kind of chimaera of elements chosen for a number of reasons, ranging from structural robustness, health and safety, or purely because they were interesting. features.”

The structures could stand up to 13 metres tall, with thick walls at the base – sometimes as wide as five metres – tapering away towards the top. Small beehive-shaped rooms, known as cells – were accessed through low narrow doorways with brochs possibly topped with a thatched roof.

Each broch usually came with a series of outbuildings such as wags, wheelhouses and blockhouses.

Brochs were built up to 13 metres tall with extra thick walls giving way to a tapered tower. It is thought they were at the “nexus” of the farming communities who called them home. PIC: Bob Marshall/Caithness Broch Project.

Mr Maclean added that a number of features – such as the roof and the construction of the floors – “ had to be figured out with a degree of educated guesswork and speculation given that none of these survive in archaeological record”.

He described the organisations vision “as honest an interpretation of what a broch looked like as we may ever arrive at.”

Brochs were built to such height to accommodate multiple floors, with some having two suspended floors above the entrance levels. Staircases would always ascend in a clockwise direction, if viewed from above.

The structures were first thought to have been built as defensive fortifications but it is now believed that they were home to farming communities. They have been described as the “nexus of the communities which inhabited them” and where a number of activities were carried out, such as the processing and storage of grains and crafts such as weaving and clothes making.

Brochs were most commonly found across the north and west of Scotland during the Iron Age. PIC: Contributed.

CBP said that archaeological evidence had shown brochs had a complex history of use and were the centre of social, cultural and communal life.

The group hope the broch will become a “thriving visitor attraction” for Caithness and draw people to an area which is projected to lose more than 20 % of its population over the next 20 years.

Kenneth McElroy, director of CBP, said: “This project will be a hugely important one for the county. Not only do we want this to become a sustainable and successful contribution to the economy of Caithness, but it could become an icon for the county too.”

Caithness Broch Project hope to acquire land for the construction of the broch within the next year, with funding being sought from from a variety of sources.

It is hoped to start building the broch in 2023.

A message from the Editor:Thank you for reading this article. We’re more reliant on your support than ever as the shift in consumer habits brought about by coronavirus impacts our advertisers.