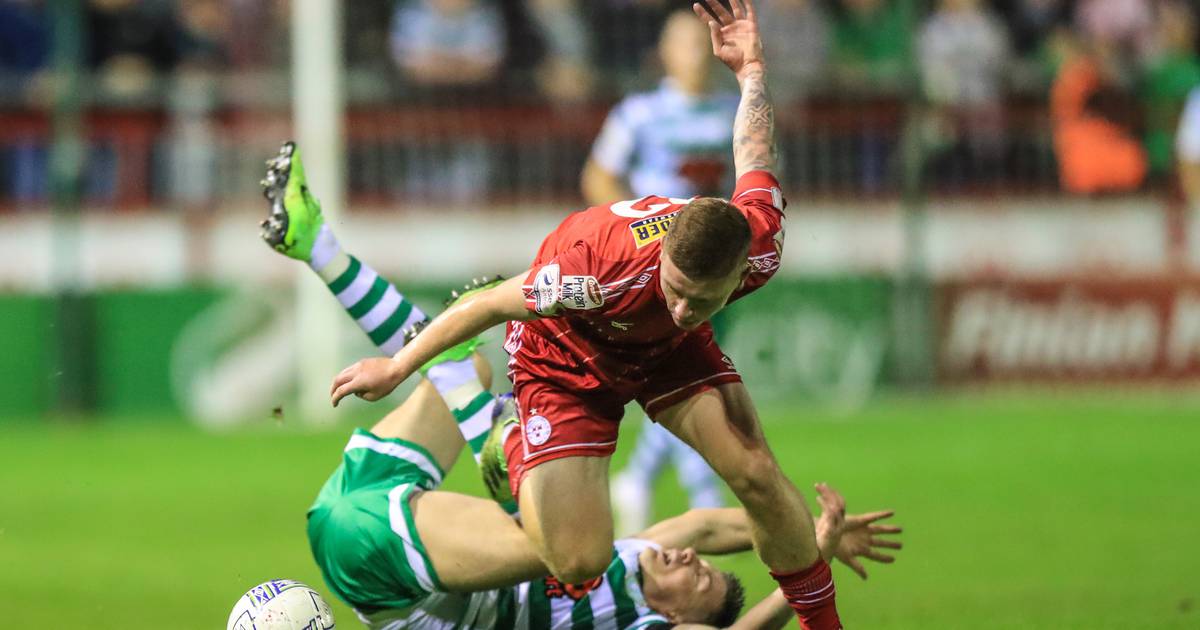 Shamrock Rovers moved two points clear at the summit of the SSE Airtricity League Premier Division after playing out a scoreless draw with Shelbourne at Tolka Park on Thursday night.

Chasing a third consecutive league crown, Rovers struggled to break down a stern challenge from seventh-place Shels in one of the more forgettable Dublin derbies. Monday evening’s clash with UCD in Tallaght offers the title holders a chance to extend their lead at the top, but their main rivals Derry City remain firmly in contention for the time being.

Despite being six places and 26 points adrift of their opponents, recent events ensured confidence wasn’t an issue within the Shels camp coming into this game. Courtesy of goals from Sean Boyd (two) and Jack Moylan, Damien Duff’s troops recorded a superb 3-0 victory over Bohemians in Tolka last Sunday to convincingly book their spot in the FAI Cup semi-final.

By contrast, Rovers battled admirably with 10 men in the same competition before suffering a 3-1 extra-time reversal to the aforementioned Derry.

While injury saw gifted attacker Moylan missing out on the visit of the Hoops to Drumcondra, Shels passed the ball around nicely during the early moments of the contest. Club captain Ronan Finn was one of five players to earn a promotion from the Rovers bench for this encounter, but the visitors initially struggled to settle into their stride.

They offered more of an attacking threat as the half progressed, however, and Shels were hit with another injury set-back just past the first quarter mark. Having replaced Moylan against Bohs last weekend, Brian McManus picked up a knock himself and was forced to make way for Aodh Dervin.

Finn had headed just wide of the Shels goal prior to his withdrawal and Daniel Cleary was also marginally off-target from a subsequent Rovers set-piece. Nevertheless, Reds netminder Brendan Clarke enjoyed a relatively quiet opening period and it was a similar case for his opposite number Alan Mannus.

There were some unsavoury scenes just shy of the interval as missiles were seen to be thrown at the match officials from the stands. Although this briefly halted the play, a stern warning from the Shels tannoy helped to bring order to the situation.

The hosts ramped up the pressure on Rovers when the action resumed, but the deadlock ultimately remained unbroken as the teams headed into the dressing rooms.

In a bid to gain control in the middle-third of the pitch, Hoops manager Stephen Bradley introduced Chris McCann for Neil Farrugia. This led to Gary O’Neill relocating from central midfield to the back-three with Sean Kavanagh assuming Farrugia’s left wing-back duties.

McCann was doing his utmost to enhance the attacking output of Rovers and Jack Byrne was also dropping deep to become more involved in their build-up play. Yet Shels continued to keep their cross-city rivals at bay and it looked like it was going to take a moment of magic to establish daylight between the sides.

Rovers centre-half Cleary almost provided it in the 70th minute as he sized up the target from distance and hammered a ferocious strike against the underside of the Shels crossbar.

This was a massive let-off for the home team and with Aaron Greene, Richie Towell and Aidomo Emakhu added to the mix alongside McCann, Rovers were expected to pile on the pressure inside the final quarter.

However, it was Shels who arguably had the stronger finish to the game and their Tallaght counterparts were made to dig deep for a share of the spoils in the end.