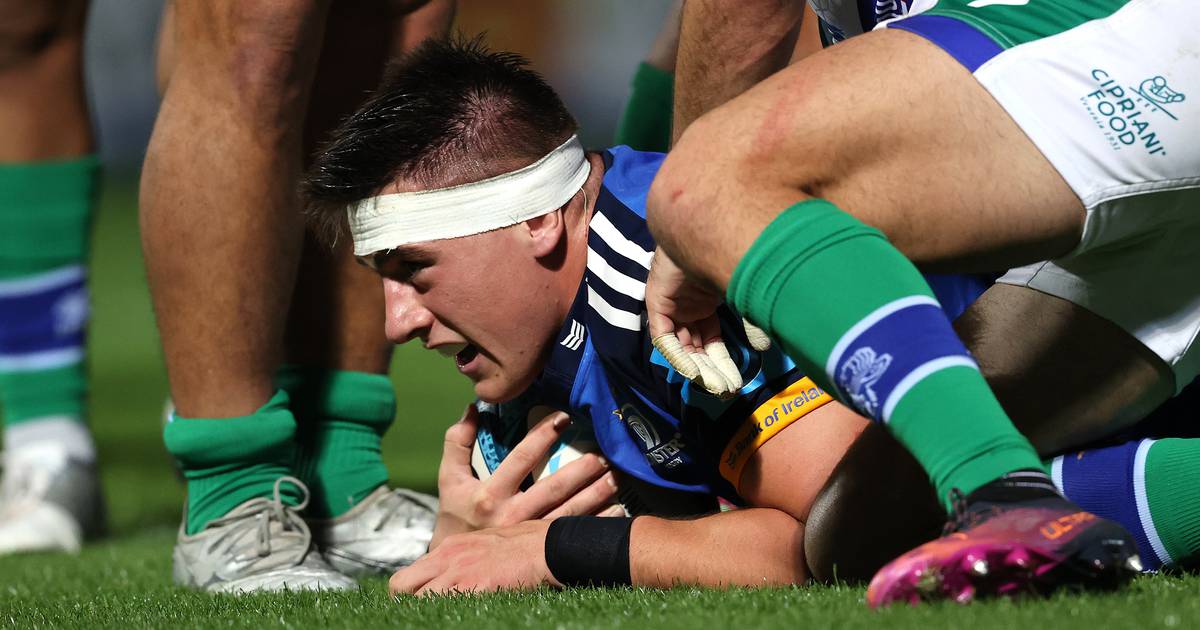 The narrative for Leinster’s first home game of the season was fairly straightforward really. Penalty, go to the corner, Dan Sheehan hits Ross Molony, the Leinster pack cranks it up for Dan Sheehan to score and Ciarán Frawley converts. Copy and paste. Copy and paste.

Thrice this script unfolded for Sheehan to score a first-half hat-trick, taking his tally to 18 tries in 30 Leinster appearances, before adding a 19th in the second period, and laying the foundation for the province’s second bonus point win over Italian opponents in their opening two URC games.

Unlike the defensively disconnected 33-29 win in Zebre last weekend though, Leinster’s control was unrelentingly ruthless here – most likely as a response to that performance. They duly pressed on with three more tries in the second-half although the biggest cheer of the night, and standing ovation, was reserved for Cian Healy when winning his 250th cap in the 54th minute.

The all-action performance of Jason Jenkins – line-out steals, carries, truck-like clear-puts at ruck time – would again have made any watching Munster supporters rueful after his injury-plagued season there.

Ross Molony, promoted to the starting line-up when James Ryan was withdrawn as a precautionary measure after tweaking his hammy at the captain’s run, augmented his aerial game with his usual industry and improved skills.

All the internationals, notably Josh van der Flier and Robbie Henshaw, also looked very sharp, although the one disconcerting blemish was Caelan Doris departing for an HIA in the sixth minute and not returning.

Frawley looked assured and had one lovely touch when orchestrating a strike play and offloading one-handed to Jordan Larmour. Even so Ross Byrne made the most of his 45th minute introduction, albeit Frawley had treatment on an apparent shoulder injury in the first-half and is part of this vexed Emerging Ireland tour to South Africa, the squad for which departs on Sunday.

In time-honoured fashion, Leinster absorbed Benetton’s first multi-phase attack with a good defensive set and after both sides found some space on the edge Henshaw crosskicked into acres of grass on Benetton’s right flank, Doris gathering on the first bounce with ease.

When the supporting Dave Kearney was tackled prematurely by Mattia Bellini, the winger was binned. As sure as night follows day, Leinster went to the corner and although the initial drive off Ross Molony’s take was held up, Sheehan peeled infield to score, Frawley landing a good conversion.

Within 10 minutes, by way of variation, Frawley kicked a scrum penalty up the line and this time Sheehan hit Molony at the tail before Kearney peeled infield to launch Henshaw up the middle. Going to their power game, a few phases later Sheehan rumbled over again.

Giacomo Da Re did open Benetton’s account with a scrum penalty of their own and they did hold up Leinster’s third close-range lineout for a turnover, only for Sheehan to hit Molony again from the ensuing scrum penalty to the corner, and the pack drove over for the hooker to complete his hat-trick.

Benetton did deny Leinster the bonus point before half-time time when a big defensive set was completed by the excellent Toa Halafihi winning his second penalty in the jackal.

After the resumption, Sheehan actually knocked on when eyeing up a fourth from another power play off a penalty to the corner. But less than two minutes after his introduction Byrne commanded the ball and put some good shape on Leinster’s phased game before combining with Larmour to put van der Flier over in the corner for the bonus point, duly converted.

All that remained was for Leinster to fill their boots. Cue penalty to the corner, Sheehan hit Baird and then drove over for his fourth and Leinster’s fifth before being replaced.

But Benetton were improved by the introduction of their bench, the slippery Argentinian Ignacio Mendy putting them on the front foot before they retained possession for Halafihi to put Manfredi Albanese over for a sharply taken try within two minutes of the 21-year-old scrumhalf coming on for his debut.

Garry Ringrose was denied a try after Jimmy O’Brien and Luke McGrath made inroads off a nice strike play from deep, thanks to the brilliant covering tackle of replacement, if first-choice, hooker Gianmarco Lucchesi, who followed that up with a turnover penalty and big carry.

But Byrne restored order and normal service was resumed when McGrath jinked over from another catch-and-drive.