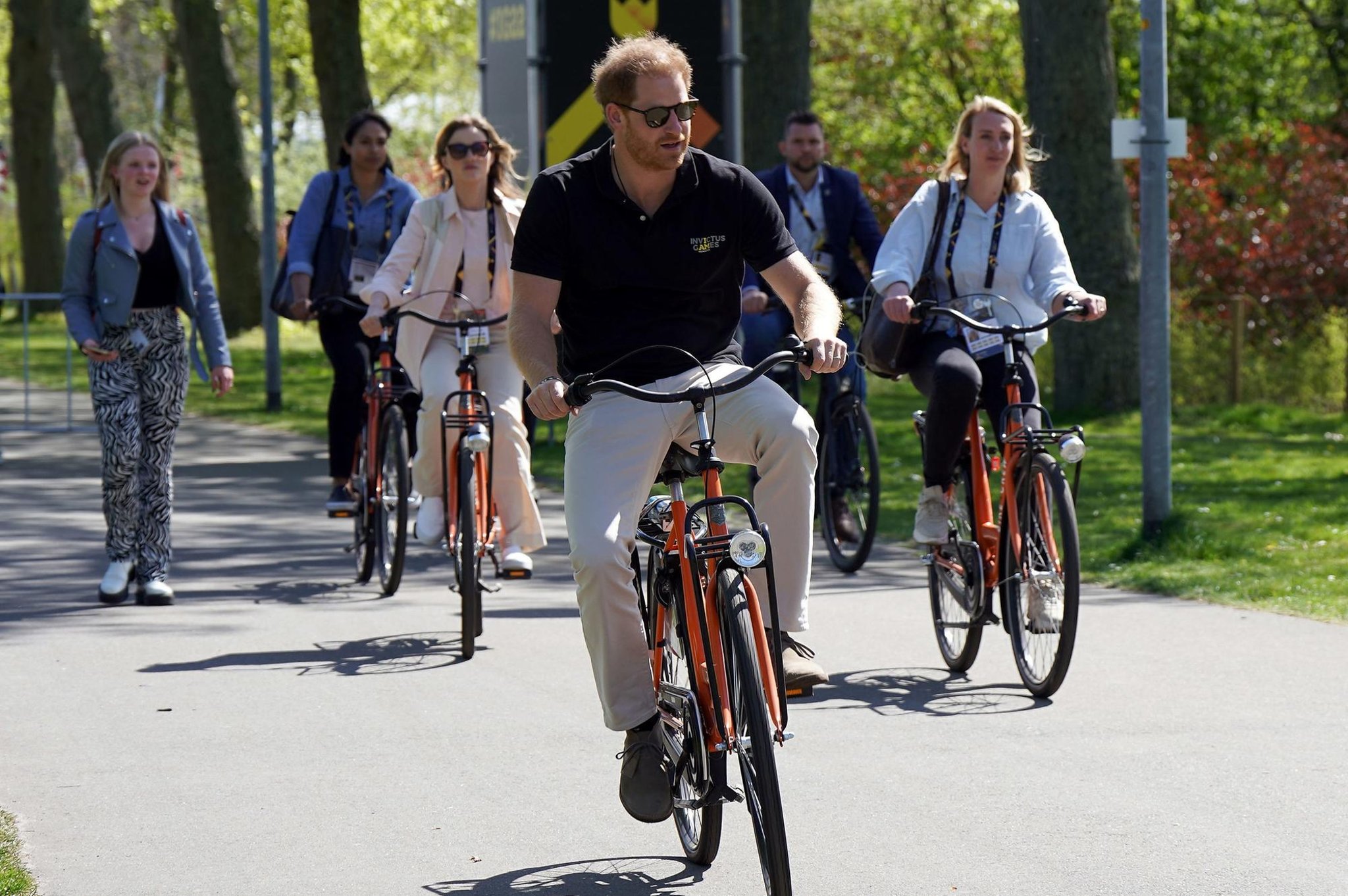 The Duke of Sussex cycles through Zuiderpark during the Invictus Games at the Zuiderpark, in The Hague, Netherlands.

In comments which caused widespread confusion, the Duke of Sussex, said the Queen was “on great form” during their recent meeting but added he wanted to make sure that she had “the right people around her”. As she the Monarch is surrounded by the Royal household, it is not known exactly to what the Duke was referring.

He and his wife Meghan visited the monarch and met with the Prince of Wales in Windsor on Thursday, having flown in from their home in the US before travelling on to The Hague in the Netherlands for the Invictus games.

It is the first time the couple had been seen together publicly on this side of the Atlantic for two years.

Speaking to NBC’s Today show about his meeting with the Queen, he said “Being with her it was great, it was just so nice to see her, she’s on great form.

“She’s always got a great sense of humour with me and I’m just making sure that she’s protected and got the right people around her.

“Both Meghan and I had tea with her, so it was really nice to catch up with her.”

It came just ahead of the monarch’s 96th birthday, and just over a year after the funeral of her husband the Duke of Edinburgh. Harry also refused to say whether he missed his father and brother but that he considered the US to be his home now.

Harry said: “Home for me now, for the time being, is in the States and it feels that way.

“We’ve been welcomed with open arms and have such a great community up in Santa Barbara.”

The couple moved to Montecito, California, following their decision to step down as senior royals in 2020, saying they wanted a new life of personal and financial freedom

Harry flew back from California, without Meghan who was heavily pregnant at the time, to attend his grandfather’s funeral in Windsor in April 2021.

He also returned to the UK to unveil the statue of his late mother Diana, Princess of Wales on July 1 2021 with his brother the Duke of Cambridge.

However, he said he did not know if he would return to the UK to celebrate the Queen’s Platinum Jubilee, saying there are “security issues and everything else”.

Asked about his mother Diana, Princess of Wales, Harry said he felt her “presence” in everything he did, and talked to his son Archie about “Grandma Diana”.

Asked to name the best thing about his grandmother, Harry replied: “Her sense of humour and her ability to see humour in so many different silly things. We have a really special relationship, we talk about things that she can’t talk about with anybody else.”

He added: “But I think after a certain age you get bored of birthdays.”

When questioned whether she would be bored of her Platinum Jubilee he replied with a laugh: “No, I don’t think so. She’s had a few jubilees now, every one is slightly different but I’m sure she’s looking forward to it.”

There has been speculation whether Harry will make a balcony appearance with the Queen during the Platinum Jubilee celebrations.

When asked about returning to the UK for the event with the Queen he replied: “I don’t know yet, there’s lots of things – security issues and everything else. So this is what I’m trying to do, trying to make it possible that, you know, I can get my kids to meet her.”