The Russian tournament favourite prevailed in five sets in the early hours of the morning and was booed by sections of the crowd after revealing he was channeling Novak Djokovic in the pressure moments.

The quirky world No.2 – who has seemingly taken and embraced Djokovic’s mantle as an AO villain – was then asked by a journalist if he had been “mimicking” Auger-Aliassime’s “unique” grunt when trading shots at Rod Laver Arena. 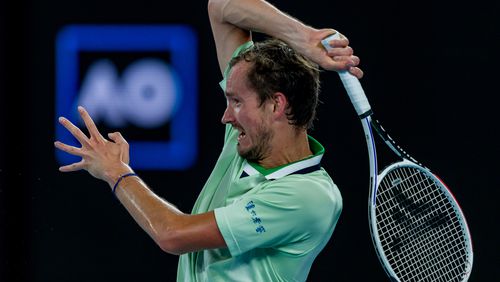 “To be honest, in life, I think that’s my character, like when I talk to a person a lot, so when I have a best friend or wife, they get nervous because I start to be like them in many things and I do it not on purpose,” Medvedev replied.

“That’s just how I am. Same, as I say, if I have a new friend and I’ll talk to him a lot, I’ll start to do some phrases like him. I’ll start to sometimes act like him and he’s going to be like: ‘what the hell, man? why you doing that?’

“I think definitely I didn’t do this on purpose, like not zero per cent. I think it’s just, yeah, he was putting a lot of intensity in his grunt, and when I started to like really fight for, you know, for my life, I was, like, I’m going to grunt also. I didn’t think about this, but now when I rethink, it’s true that some points I was like after the point: ‘did I just grunt kind of like him?’ So, yeah, it was not on purpose.” 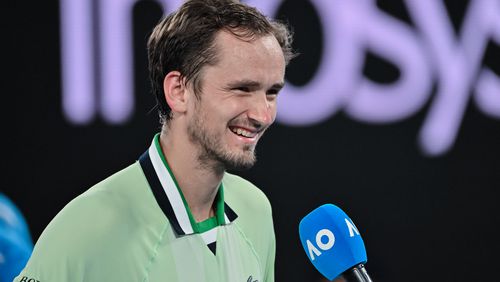 Medvedev was then asked what could happen when he plays Stefanos Tsitsipas in tomorrow’s semifinal.

“Well, he doesn’t grunt a lot, no? I’m definitely not going to start playing one handed backhand, that’s for sure,” he said while smiling.

“Yeah, it’s also not every match that I grunt like my opponent, but this one was pretty tight, so maybe something mentally was going through the brain unconsciously that made it happen like this.” 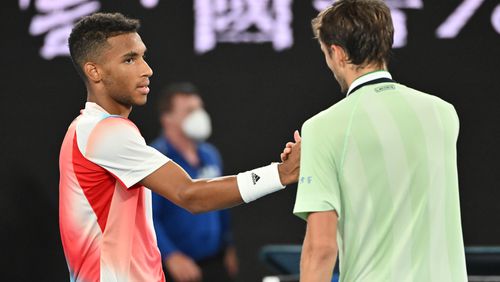 Medvedev also expanded on the Djokovic name drop from his on court interview and the reaction from the crowd.

“They booed. Again, as a person, I’m trying to be honest of course. Sometimes I cannot talk about everything, because we live in the time where you cannot say anything, everything you think. But this, I mean, their reaction, I try to be honest with them, to tell them how I felt during the match. Yeah, I like honesty.”