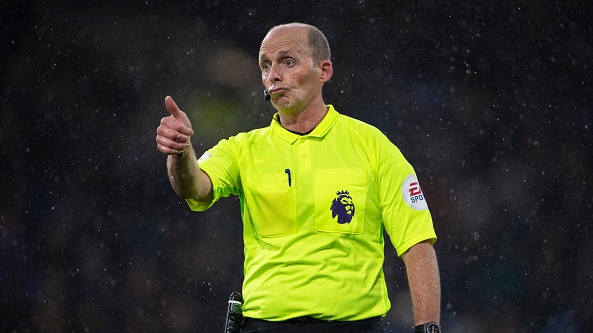 Leicester City’s 1-0 victory against Southampton at Filbert Street on Saturday September 9th 2000 was a thoroughly unremarkable game. The home side dominated for long periods before the original Harry Maguire prototype, Gerry Taggart, headed them into a deserved lead from a Steve Guppy corner after 66 minutes.

Leicester held out for the win, surviving a late penalty appeal from Southampton when James Beattie went down under a challenge from Tim Flowers.

While the match may not have lived long in the memory of anyone who saw or played in it, it was a very special occasion for at least one participant. Recently promoted to the Select Group of Premier League referees, a 32-year-old match official from Wirral took charge of the game.

It was his first in the top flight and, despite the presence on the pitch of Robbie Savage, a player who was as argumentative as he was combative, it could scarcely have been more straightforward for the novice whistleblower.

There were no bookings, no sendings-off and few moments of controversy. Travelling home afterwards to write up his match report, Mike Dean could have been forgiven for thinking he had this refereeing lark sussed.

Dean has officiated 552 further Premier League matches in the intervening 22 years and it would be fair to say that not all of them have gone as smoothly for a man who has since become the most recognisable and controversial football referee in England.

Last week it was reported he is to hang up his whistle at the end of the season and he is understood to be in talks with his employers, the Professional Game Match Officials Limited, with a view to taking a senior role among the much-maligned curtain-twitchers in the Stockley Park video room.

While the news of his potential new gig has prompted much eye-rolling among the many managers, players, fans and members of the punditocracy who view him as a pompous, overly officious popinjay, the vastly experienced 53-year-old might just be the ideal candidate to whip the VAR room into shape.

Dean is reviled by many who see him as something of a showman who seems a little too fond of the limelight, but for all his nutmegs, extravagant gestures and no-look yellow cards – not to mention that infamous and ill-advised celebration of one of his own decisions to play an advantage that led to a Tottenham goal against Aston Villa – he is actually very good at what has, in recent years, become an increasingly difficult job.

British football currently finds itself in a refereeing crisis, with insufficient numbers of officials willing to subject themselves to the general hassle and occasional violence that taking charge of games at grassroots level regularly entails.

Further up the food chain, those who do stick at the job for long enough to become professional and work in front of increasingly large crowds have their every decision subjected to unprecedented and often unfair levels of scrutiny, which only serves to fuel inevitable toxic abuse from those in the stands who remain convinced there is some big conspiracy against their team.

Of course referees make high-profile blunders, two of which came from Dean in quick succession a little over a year ago and led to him asking to be stood down after he received online death threats for the heinous crime of being overzealous when it came to brandishing his red card.

At this point, it behoves us to mention that Dean has shown a record 114 red cards to various footballing miscreants in the course of his career. It’s a large number, but one that ought to come as no great surprise considering how much more experienced he is than his peers.

“I’ve had a lot of grief over the years,” he told Peter “Tubes” Dale of Soccer AM fame during a long interview over a round of golf last year. “Some deserved, some not deserved. It does come with the job, rightly or wrongly. If you do upset one set of fans, you don’t go out there to do it on purpose. You make an honest mistake, put your hands up and move on.”

While referees must try to move on, those affronted to the point of apoplexy by their errors often seem to find it far less easy to do so. It was telling that news of the threats levelled at Dean was greeted with the utmost gravitas by assorted British TV and radio networks who seem almost comically unaware that, by devoting large tracts of airtime to often ill-informed analysis of the errors made by match officials, they are fanning the flames of outrage.

“Next up, Peter Walton spends 10 uninterrupted minutes poring over the excruciating minutiae of an entirely subjective call made by one of his former colleagues, then after the break we’ll clutch our collective pearls when football’s more paranoid and tribalistic fans get ridiculously upset by that decision we’ve just put under our giant microscope.”

VAR remains a particular bone of contention, an innovation that has successfully solved some problems for football officialdom while simultaneously creating an apparently endless stream of new controversies for angry conspiracy theorists to rage and rail against. “It’s not going away so we’ve got to get used to it,” Dean said last year. “I think it will work.”

A good communicator who is reported to be popular among his peers and will have 22 seasons of top-flight refereeing experience behind him when he retires from on-field officiating, Dean is as well-placed as anyone in the country to help iron out the kinks that continue to bedevil VAR and its use in English football. If anyone can master the art of no-look video assistance, it surely is him. – Guardian