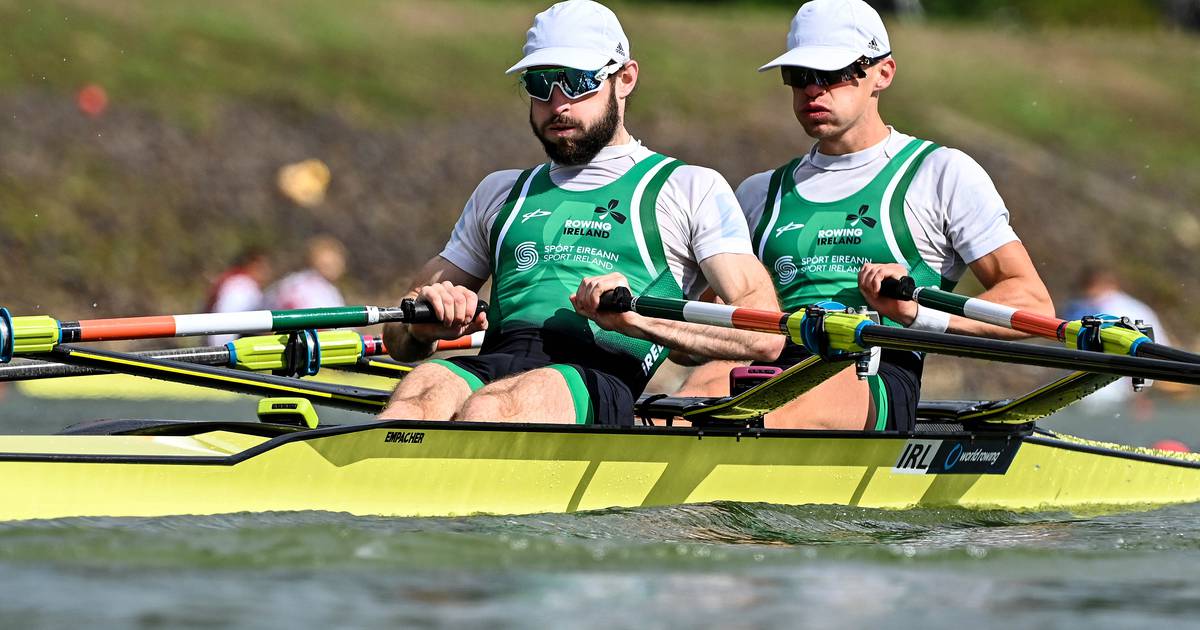 One of these days Fintan McCarthy and Paul O’Donovan might lose a race, the latest evidence coming from the World Rowing Championships suggesting that probably won’t be anytime soon.

The reigning World, Olympic and European champions continued their quest for another lightweight double sculls title with a convincing win in the quarter-finals during Wednesday’s fourth morning of racing in Račice, Czech Republic.

For the three other Irish boats on the water in quarter-final action, it was a case of near and yet so far – and particularly for Phil Doyle and Konan Pazzaia in the men’s double, out again after an impressive showing in their heat, finishing second to Britain.

This time they had the Olympic champions France to chase, which they did, Doyle combining this season with Pazzaia, the 21-year-old Swiss-born rower whose mother hails from Belfast.

Second at halfway and still second at the 1,500m mark, the Irish crew just lost out on third in a frantic finish, the USA coming through for second, the Norwegian crew given third in the photo-finish, Doyle and Pazzaia just .03 of a second short, and therefore must be content with the C/D semi-finals.

McCarthy and O’Donovan weren’t the fastest crew to qualify for their A/B semi-finals, the effort of the Skibbereen pair however once again perfectly measured as they took the win in the third of the four races by a clear boat length, finishing in 6:21:05 ahead of the French crew, Spain coming home third ahead of the USA.

The French had taken a jump on the Irish in the opening 500m, still McCarthy and O’Donovan weren’t bothered, completing the second 500m just a second slower than the first. They took control from the halfway mark, moved 1.39 seconds clear at 1,500m, finishing it seemed with plenty in reserve.

With flat, calm conditions after a blustery opening few days, the rowing was impressive across all four races, the local Czech crew of Jiri Simonek and Miroslav Vrastil winning the first quarter-final in 6:20.32, the Italian crew of Stefano Oppo and Pietro Ruta, second to the Irish at the European Championships last month, just about keeping their medal hopes alive after snatching third in a photo-finish, just 0.04 ahead of Poland, only the first three making the A/B finals.

Once again the young Swiss crew of Raphael Ahumada Ireland and Jan Schaeuble, third in those European Championships, impressed when winning the fourth quarter-final in 6:25.53, ahead of Belgium and New Zealand, Norway winning the second quarter-final also in a photo-finish with Portugal, finishing in 6:20.83.

It all makes for interesting racing in Friday’s A/B semi-finals, the top three in each progressing to the final, McCarthy and O’Donovan still the clear favourites.

Brian Colsh of University of Galway Boat Club was also out again in the quarter-finals of the men’s single sculls. After finishing third in his heat, the 20-year-old Sligo rower also just losing out on third in the last 250m to the fast-finishing Piotr Plominski from Poland, coming home in 6:53.57. Jordan Parry from New Zealand took the win there in 6:53.57.

Earlier, Hugh Moore also finished fourth in the quarter-final of the lightweight men’s single sculls, the Queen’s University rower fourth in 7:11.08 after a late charge on third place, the win going to Italy’s Gabriel Soares in 7:02.32. For Moore too it’s the C/D semi-finals next.