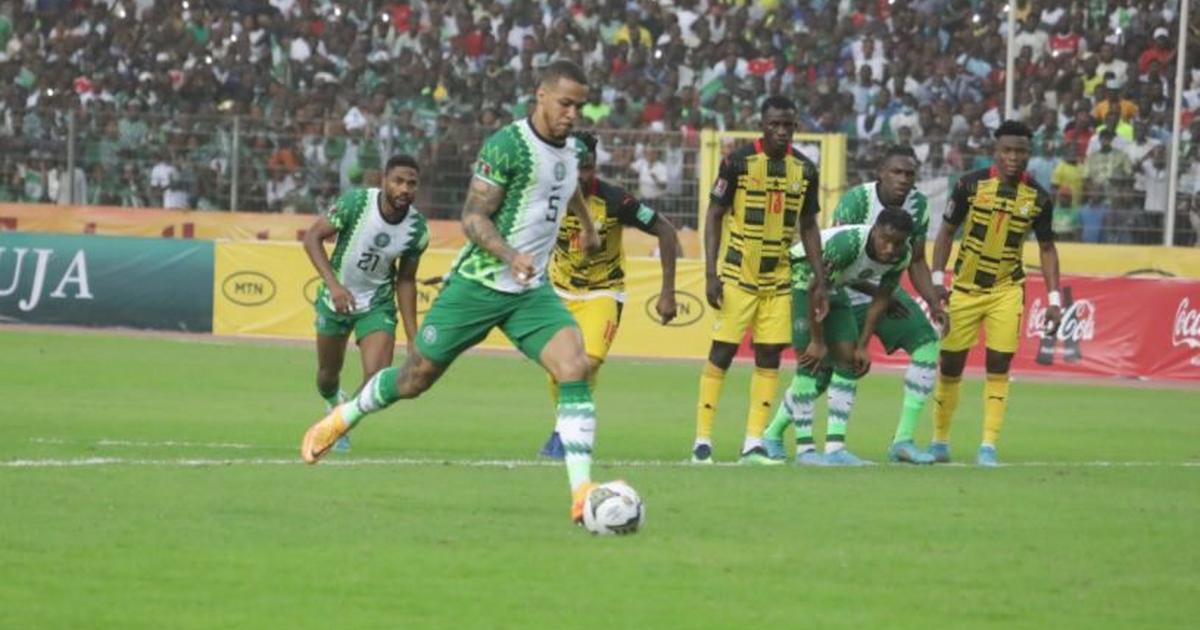 Nigeria went into the game, knowing they needed an outright win to qualify, having played a goalless draw in the first leg at the Baba Yara Stadium on Friday night.

The Super Eagles started the game, dominating possession as expected, but the Ghanaians defended well and were dangerous on the break.

Despite the early possession from the Super Eagles, it was the Ghanaians who got into goalscoring positions.

And their effort eventually paid off in the tenth minute, courtesy of a fortunate shot from Arsenal’s Thomas Partey.

The Arsenal midfielder fired in a shot from the edge box that went under the arms of Francis Uzoho.

The goal silenced the 60,000 people at the Moshood Abiola Stadium, but it brought the Super Eagles players to life.

Austin Eguavoen’s men took the game to the Black Stars and could have gotten their equaliser but were denied two times by Joseph Wollacott in Ghana’s goal.

However, they would not be denied minutes later after they were awarded a penalty for a foul on Ademola Lookman following a VAR review.

Starting his first game in front of the home crowd, the Leicester City man was adjudged to have been fouled in the buildup to one of Nigeria’s attempts for an equaliser.

Captain William Troost-Ekong stepped up to take the penalty, and he made no mistake, sending the goalkeeper the wrong way.

The equaliser brought more energy to Nigeria’s play, who kept pushing for a second goal.

However, Ghana defended resiliently to ensure the first half ended with the scores tied.

The second half resumed with Nigeria on the front foot but again were limited to half chances.

The three-time African champions got close to taking the lead courtesy of Victor Osimhen, but the Napoli man’s acrobatic effort from Oghenekaro Etebo’s cross flew off the post.

With time running out, Eguavoen made a change by taking off Lookman for Moses Simon.

The Nantes winger almost made an immediate impact as his set-piece found Ekong, but the Watford man’s header was brilliantly saved by Wollacott again.

As the game went on, Eguavoen once again signalled to his bench, bringing on Odion Ighalo and Ahmed Musa to add more firepower to Nigeria’s attack.

The substitutes almost made an immediate impact, with Ighalo setting up Osimhen, but once again, his acrobatic effort went just off the post.

Osimhen’s chance turned out to be the final chance as Ghana defended resiliently to see out the 1-1 draw, which sends them to the World Cup in Qatar later this year.