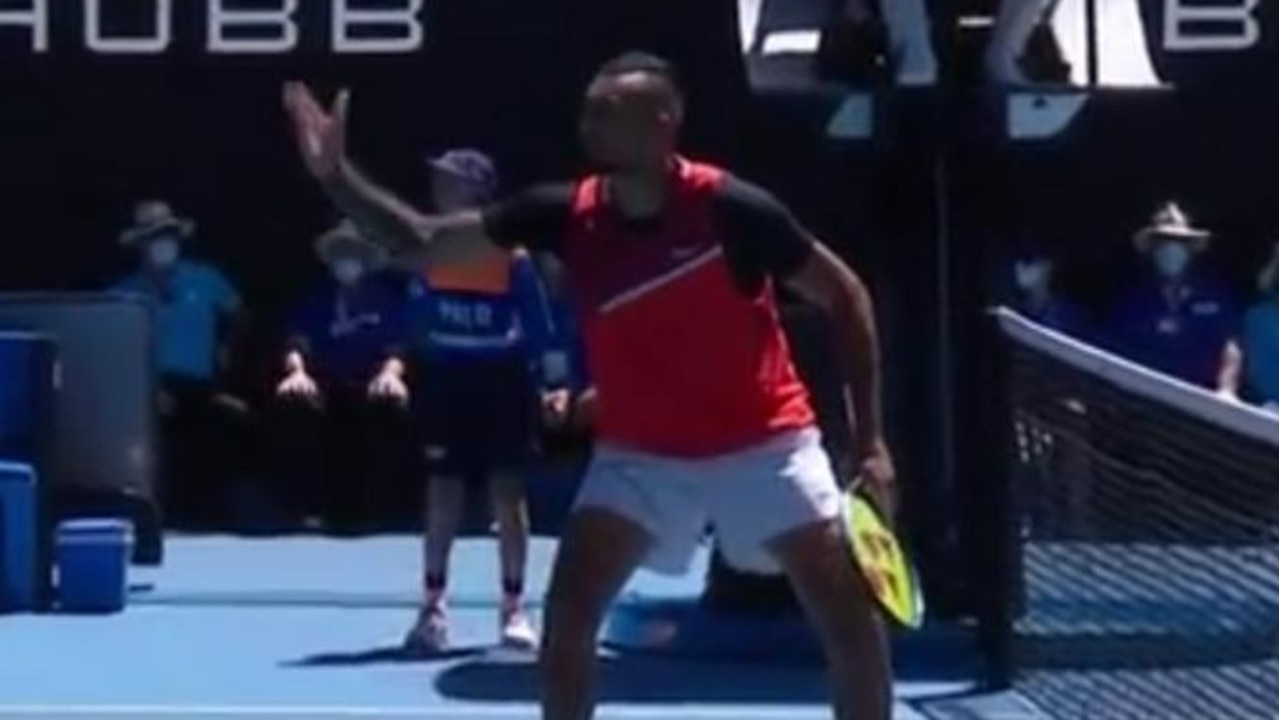 They were wildcards leading into the tournament, but Nick Kyrgios and Thanasi Kokkinakis are one win away from an Australian Open final.

There are four Australians in action on Rod Laver Arena today as the Australian Open approaches it’s climax.

The “Special Ks” will strut their stuff in the early afternoon, with Nick Kyrgios and Thanasi Kokkinakis fighting for a spot in the men’s doubles final.

Seven-time Australian Open champion Dylan Alcott will then play his last professional tennis match later in the afternoon, with the 2022 Australian of the Year facing Sam Schroder in the quad wheelchair singles final.

And the cherry on top? World No. 1 Ash Barty, who has never featured in an Australian Open final, will take on American Madison Keys in the women’s singles semi-final at 7.30pm local time.

They were wildcards leading into the tournament, but Australian duo Nick Kyrgios and Thanasi Kokkinakis — affectionately dubbed the “Special Ks” — are one victory away from an Australian Open doubles final.

The two Aussies quickly become one of the major talking points in the Melbourne-based grand slam tournament, with their antics at Kia Arena drawing huge crowds.

But their semi-final against No. 3 seeded pair Horacio Zeballos and Marcel Granollers will take place on Rod Laver Arena, right before Dylan Alcott’s highly-anticipated final.

Granollers and Zeballos were greeted by a mix of boos and cheers as they entered Rod Laver Arena, while there was a considerably louder reaction from the Melbourne spectators when the Aussies walked onto the court.

Kyrgios threw his arms up in the air as he entered the venue, spurring the crowd on — he certainly know how to engage with his fans.

“The chemistry is where it starts, they bring a level of presence out on the court,” former Aussie doubles champion Mark Woodforde said on SEN.

“They don’t play traditional style of doubles, but they’re combining well as a team.”

After winning the first point, Kyrgios was already showboating on the court, revving up the crowd at the net and cracking jokes with Kokkinakis.

A loud roar of “Siuu” echoed around the venue, a chant that has drawn a mixed reception in Melbourne Park this week.

Although the Rod Laver Arena crowd were vocal, they were considerably more subdued than the chaotic scenes witnessed at Kia Arena over the past few days.

One a few occasions, the chair umpire had to ask the spectators to be quiet between serves, far less often than previous matches involving the Special Ks.

The opening 10 games of the first set remained on serve, with Kyrgios’ powerful serve once again a force to be reckoned with.

At 5-5, Kyrgios threw his racquet onto the court in frustration after an unforced error on his backhand.

Not before 2.30pm — Nick Kyrgios/Thanasi Kokkinakis vs Marcel Granollers/Horacio Zeballos [3]

Not before 3.30pm — Dylan Alcott vs Sam Schroder

Australian Olympian Sam Groth has taken a cheeky swipe at New Zealand doubles player Michael Venus after he lashed out at Nick Kyrgios on live TV.

Venus and German playing partner Tim Puetz were beaten in three sets by Kyrgios and fellow Australian Thanasi Kokkinakis in the quarter-final of the men’s doubles in front of a raucous crowd that the Aussie pair whipped into a frenzy.

“You see why he’s never fulfilled his potential and probably never will,” Venus said.

“His maturity level, it’s probably being generous to about a 10-year-old, it’s at about that level.”

Speaking on Channel 9, Groth couldn’t resist pointing out that Venus was making these remarks after being knocked out of the Australian Open.

“He’s doing it from New Zealand,” he said on Thursday morning. “He’s not doing it from here in Melbourne Park because he lost in the tournament.

“Throw barbs, but you’re out of the tournament bud. Sorry Michael, I like you a lot, but there’s a time and place.

“I get it, the crowd’s rowdy, Nick’s rowdy — but you were giving it back, you were part of it, you were in that battle. I’m not convinced it was the right way to go.

“I have known Michael for a long, long time. He is understandably a little bit bitter the way things went down. It’s a different crowd.

“Some of the antics were probably a little bit over the top, to be honest. But his is an entertainment product. We are producing it for the fans that come into the stands, and we’re producing it for television and getting eyeballs on the screen that wouldn’t normally be watching.”

— with the NZ Herald

Ash Barty is two victories away from a maiden Australian Open title and the Aussie’s slice backhand has once again been the talk of the town.

Speaking to reporters on Wednesday, Barty’s coach Craig Tyzzer poked fun at opponents who were spotted practising facing the trademark shot ahead of their match against the world No. 1.

“I think it is a point of difference,” Tyzzer said of Barty’s slice. “There’s not many girls out there that hit a slice backhand.

“I think the fact that they don’t see it that often and then have to come up against it – it’s actually quite funny.

“When you see who Ash has to play you see them out there practising (against) someone hitting a slice backhand to them. It’s probably a bit late the day before to try to get that right. If you haven’t practised it enough now you’re probably not going to get that right.

“Her forehand is actually a weapon.

World No. 1 one Ash Barty will look to reach her first Australian Open final on Thursday, but is wary of “exceptional athlete” Madison Keys blocking her path.

The first grand slam tournament of the year hits the women’s semi-final stage with top seed Barty trying to stay on course to be the first Australian woman to lift the trophy since 1978.

Barty is renowned as one of the best tacticians in the game and has out-thought and outplayed all her opponents so far while blasting through the top half of the draw without dropping a set and barely breaking sweat.

As well as “problem-solving” her way out of tricky moments, Barty has developed an exceptional all-court game which beaten quarter-final opponent Jessica Pegula said “picks you apart”.

Keys, who made the last four in 2015 and lost to eventual champion Serena Williams, said it was important for her to “continue to focus on my side of the net”.

But she also knows Barty’s dangerous backhand slice must be blunted.

“You can’t do a ton off of her slice because it comes in so low,” said Keys.

Two-time grand slam champion Barty is aiming to succeed Chris O’Neill, who was the last Australian to lift the women’s singles trophy all of 44 years ago.

But the down-to-earth Australian is taking nothing for granted against a player who has already beaten 2020 champion Sofia Kenin, eighth seed Paula Badosa and fourth seed Barbora Krejcikova in her run to the final four.

“Maddie is an exceptional athlete, she has a great serve, great first strike off the return and off her first ball after her serve,” she said.

But after making the semis at Melbourne Park in 2019, the 28-year-old believes she now has the experience to press on.

“Now that I’ve made quarter-finals at French and semi-finals here before, I think I can use those experiences to certainly help me in the tight-pressure moments on court. I can use that to my advantage,” she said.

Swiatek is still just 20, but has also gained huge experience since her French Open triumph, and is in the second week for a sixth consecutive grand slam tournament.

But this is the first time she made the last four away from the Paris clay.

“I will approach it the same as any other match, really. I have played with some heavy hitters in this tournament already, so I feel like I’m feeling their game on my racquet pretty well,” she said.